Everything You Wanted to Know About Tarpon 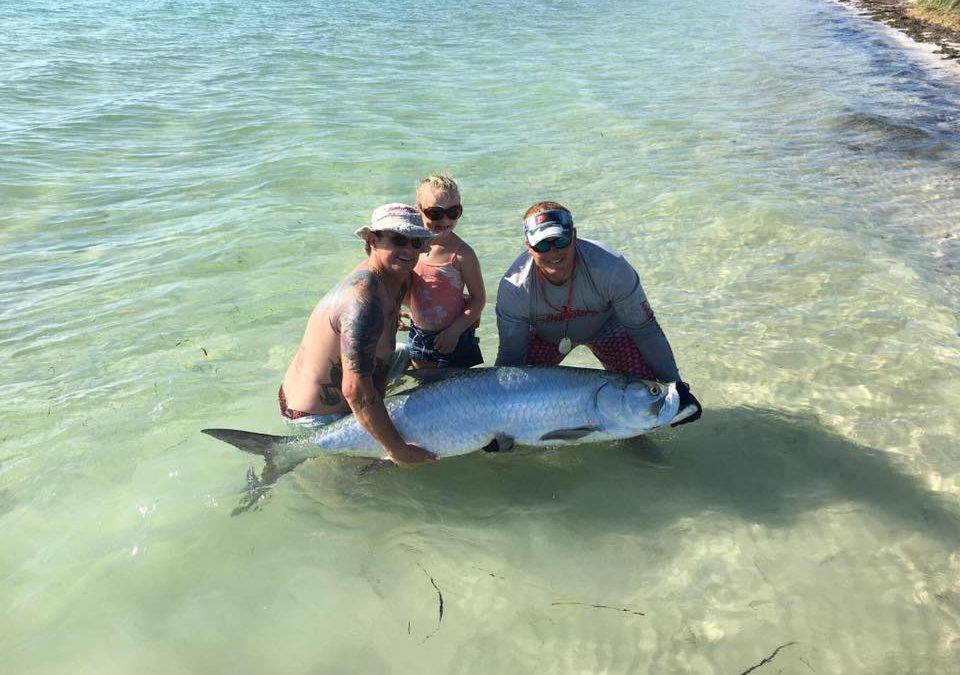 Want to know everything you can learn about the world’s most exciting gamefish? Read below.

Florida Sportsman says “the tarpon is a large thick-bodied fish generally silver in color other than its back, which can range from a dark green to gray. It has a large scoop shaped mouth and the last ray or its dorsal fin is greatly elongated. Its scales are large and thick like a coat of armor. It is a large, hard fighting fish and is judged by many to be the world’s most exciting gamefish. Once it feels the hook being set, it begins the spectacular display of frequent, twisting, acrobatic leaps into the air to free itself from the hook”. It is known as Silver King, Silver Sides or Sabalo. Tarpons are large air-breathing fish of the genus Megalops Atlanticus.

One species is native to the Atlantic, and the other to the Indo-Pacific Seas. The Atlantic are principally found to populate warmer coastal waters primarily in the Gulf of Mexico, Florida, and the West Indies. Tarpon are regularly caught by anglers at Cape Hatteras and as far as Nova Scotia, Bermuda, and south to Argentina. They prefer water temperatures in the 74 – 88 degrees F range.

You’ll find big Tarpon live-baiting in large passes, inlets, channels and river mouths throughout the state, and at sight-fishing with fly and casting tackle on shallow flats on the lower Gulf Coast from Homosassa southward. Large and medium Tarpon also are found off the beaches and in the surf of both coasts at times, and many are hooked from bridges and piers, especially at night. Medium-size fish are common in a variety of settings in South and Central Florida, including freshwater rivers and landlocked canals. Tiny juveniles inhabit landlocked canals and ditches.

What Size is Tarpon?

An average sized Tarpon can range from 25 to 80 pounds. The adult tarpon can measure up to 8 feet or longer and weigh 200 to 300 pounds.

Tarpon life span can be in excess of 50 years. The oldest tarpon in captivity lived to be 63 years old.

When Is Tarpon Season

In warmer years, Tarpon season starts as early as the end of February. The season is usually more consistent by mid-March as the water warms. The early season Tarpon are resident fish of Tampa Bay.

Are Tarpon Fish Good to Eat?

Tarpon are rarely eaten because their flesh is filled with small, hard to clean bones. In the United States, the tarpon usually is caught for sport — and then released. As a bony, strong-smelling saltwater fish, it may be more trouble than pleasure to eat.

Are Tarpon a Protected Species?

Tarpon regulations extend into federal waters and there is a one-fish-per vessel limit. The bonefish tournament exemption permit is eliminated. Transport or shipment of tarpon is limited to one fish per person.

Tarpon can breathe air. Their gills are the major respiratory organ. A tarpon can gulp air on the surface because they have a swim bladder that has a direct connection from the specialized bladder to its esophagus (throat).

Do Tarpon Fish Have Teeth?

Yes, they do. They have an enormous mouth, often exaggerated by anglers as being the size of a five-gallon bucket, tarpon have extremely small villiform (i.e., fine densely packed) teeth on their jaws, vomer, palatines, pterygoids, tongue, and skull base.

How Do You Catch a Tarpon?

You can use casting, drifting, still fishing and trolling to catch a Tarpon. Live bait (mainly small crabs and small fish) in the passes and inlets are used by Drift-fishermen. Dead baits, such as a Mullet head or half Mullet, fished patiently on bottom will entice all Tarpon. For trolling or surfcasting with heavier gear, large jigs, spoons and lipped plugs will work.

Why Do Tarpon Roll on the Surface of the Water?

Tarpon roll at the surface during an extended flight on a fishing line because they are trying to get oxygen. A tarpon’s gut is connected to its swim bladder, allowing the fish to swallow air from the surface. Once the air reaches the swim bladder, oxygen is removed by lung-like tissue called alveolar.

Yes, sharks will eat Tarpon. In Boca Grande Pass, big bull and hammerhead sharks show up in the pass to eat tarpon. “This is not a new phenomenon,” said Bob Hueter, director of Mote Marine Laboratory’s Center for Shark Research.